Decision to Have Your Dog Neutered or Spayed

Having your pet spayed (ovariohysterectomy) or neutered (castrated) is an inexpensive and realistic method of pet population control. The number of unwanted adult and young animals that are euthanized each year in the United States is astounding. Aside from the pet overpopulation problem, neutering a male dog and spaying a female helps prevent, and even eliminates, medical problems associated with hormonal imbalances.

It is usually noticeable when a female dog (bitch) reaches sexual maturity. A bloody discharge is seen around her external genital area. This bloody discharge is significant and can last up to 10-14 days. Along with the discharge, the external genitals become swollen. This is the first phase of her heat cycle and is called "estrus." During the last few days of the estrus phase, the bitch is receptive to the male and can get pregnant. Similar to cats, the gestation period lasts about two months. At the end of the two-month gestation period, puppies (puppies, not a puppy) are born. A typical litter size averages between five to 10 puppies. 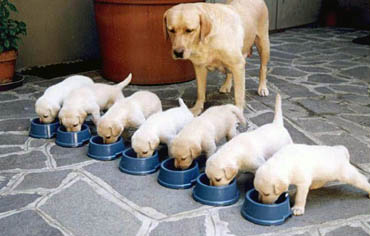 Aside from having puppies, non-spayed females are more susceptible to mammary gland tumors and uterine infections. Pyometras (infections of the uterus) are extremely common in non-spayed bitches and almost always require emergency surgery. Mammary tumors get large and multiply quickly if left untreated. Having your dog spayed can eliminate both of these conditions.

Having your male dog neutered makes him a better pet. Instead of roaming, he will spend more time at home. Non-neutered male dogs often exhibit aggressive behavior, especially if a non-spayed female is in the vicinity. Dog fights between two non-neutered dogs are not uncommon. Usually one of the dogs ends up severely injured.

An aggressive dog will not hesitate to bite a human. Often, non-spayed and non-neutered dogs are significantly more aggressive than spayed and neutered animals. Many people receive serious injuries resulting from dog bites.

Dog neuters and spays are generally performed when animals are six to fourteen months of age, following the advice of your veterinarian. For large breed dogs such as German shepherds, Labradors, Golden Retrievers, etc., it may be better to wait until all of the bone growth plates have closed. This generally occurs around 12 to 14 months of age.

The health benefits of neutering your male dog may not be as pronounced as those for the female. Your neutered male dog will spend less time roaming and more time at home. Non-neutered male dogs may be more prone to aggressive behavior, especially if a non-spayed female dog is close by. Fights between non-neutered dogs are not uncommon so finding a dog park or day care that accepts them may be somewhat difficult.